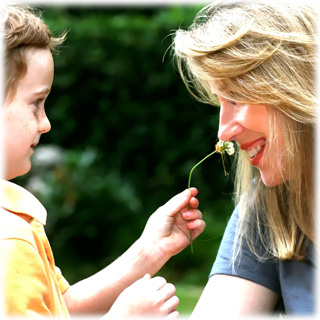 Marie was raised in the small university town of Champaign-Urbana, Illinois. The third in a family of 8 children, she escaped the humdrum of the Midwest through the music she heard on her blue transistor radio, singing her favorites in talent shows to her high school class of 24. Marie continued to perform through college at local venues, eventually earning her BA in Economics at Swarthmore College and her MBA at Vanderbilt University in Nashville, TN. While working MBA jobs in Music City, Marie sang backup vocals, jingles and songwriter demos, including duets with the up-and coming star Alan Jackson. After three years, with a vision of starting a family of her own, Marie married and moved overseas, leaving her music and business careers behind. Marie returned to the United States four years later with three young boys and twins on the way. Soon Marie began writing her own songs about the everyday struggles of a mother of five living next to Highway 100, which yielded her debut album, “What I Wanted to Say”(1997). As her family grew, Marie’s artistic efforts did as well, releasing four more albums that follow her journey from young wife, “Ordinary Time” (2000), to a mother of nine in a bit over her head, ”Lighten Up” (2003) to a seasoned veteran of the culture wars, “ A New Springtime”(2006), “Everything Changes” (2010). A lone voice calling for a return to family in the midst of a materialist world, Marie Bellet writes authentic Americana songs that take the listener away from the distractions and conventions of pop culture and focus upon the importance of sacrificial love. Much like the singer/songwriters she listened to growing up, she moves off the glamorous beaten path and tells deceptively simple stories that make larger statements about hardship, heartbreak, redemption, and renewal within the real world.

“I write about the life I know, from something as simple as getting through a trip to the grocery store with a bunch of kids to something as difficult as watching a son deploy to Afghanistan. I want to tell others that sacrifice is not stupidity or victimization. It is noble. It is transformative. It is love.”

Over the years Marie has brought her pro-family message to many organizations and apostolates.
To view the list, click here.